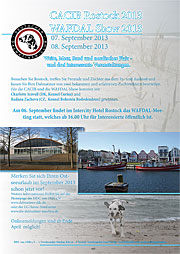 On September 08, the German Dalmatian Club DDC invited breeders from near and far to the WAFDAL-congress in Rostock. Rostock is the largest city in the north German state Mecklenburg-Vorpommern. Rostock is on the Warnow river; the district of Warnemünde 12 kilometres (7 miles) north of the city centre is directly on the Baltic Sea coast. The city territory of Rostock stretches for about 20 km (12 mi) along the Warnow to the Baltic Sea. The largest built-up area of Rostock is on the western side of the river. The eastern part of its territory is dominated by industrial estates and the forested Rostock Heath. Rostock is considered as the only regiopolis in Mecklenburg-Vorpommern.

Thanks a lot the the DDC for the organization of that weekend! A very special thanks to all those who were entrusted with the planning and implementation of this event!

Report by the Chairman (english)

Report by the Secretary (english)