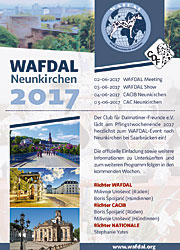 The WAFDAL Meeting & Show 2017 will be in Neunkirchen / Germany, near Saarbruecken.

The Club for Dalmatian Friends in Germany (CDF e.V.) invites breeders from near and far to the next WAFDAL-Congress in Saarbruecken. The state capital of Saarbruecken is the regional centre of the Saarland and is situated at the heart of the Saar-Lor-Lux region. The city is strongly influenced by its proximity to France and the chequered history of a French-German border town.

This years meeting will take place in the "Victor´s Residenz Hotel" in the heart of Saarbruecken. The WAFDAL show as well as the International and National show will take place on the following days at the fairground in Neunkirchen, about 30 minutes away from Saarbruecken. It is therefore possible to get 3 CAC within the three shows and also 1 CACIB at the international show.

You will find further information, contact details as well as prices in the invitation below.

Picture Gallery (will be published after the event)